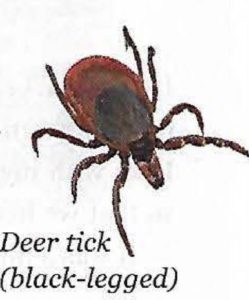 ALONG WITH NEIGHBORING PENNSYLVANIA, New York State is the epicenter of tick-borne illnesses in the U.S. Outdoor publications, including this one, have been in the forefront of educating readers on the problem. For most folks, “tick-borne illness” means Lyme disease. Certainly, that condition has been the most widely discussed in the media. While clearly the most common of the conditions carried by these pests, it is neither the only, the most serious, nor the most life-threatening one.

In this and the next column, I will review the basics of several other tickborne diseases which have been reported in New York. It is probably important for users of the backcountry to have at least a passing familiarity with these conditions. Many of them have rather nonspecific symptoms, some of which might not even prompt an immediate call to one’s physician.

Connecting features of these conditions to one’s recent tick exposure will permit early evaluation and treatment before the disease can progress. The importance of this hit home to an active outdoorsman/physician colleague of mine a few months ago, when he needed to remind his own physician to consider anaplasmosis when he became ill after tick exposure.

Anaplasmosis, a disease affecting many organ systems, is caused by a bacterium called Anaplasma phagocytophila. Several species of ticks may be carriers of this bacterium; at least one of them may carry both this and Borrelia burgdorferi, the organism responsible for Lyme disease. The white-tailed deer and the white-footed mouse are the animal reservoirs of anaplasmosis. In 2017, the most recent year for which we have data, there were 1196 cases of anaplasmosis in New York.

The symptoms of anaplasmosis are varied and somewhat nonspecific. The disease most often follows tick exposure by one to two weeks. Fever is one of the most common initial features; this sometimes may be severe enough to be associated with soaking sweats and chills. Generalized ill-feeling, along with muscle aches and vomiting, frequently develop. Unlike Lyme disease, for which rash is often a hallmark, rash is uncommon in anaplasmosis. If the disease is not recognized and treated, symptoms may progress to a very serious condition, requiring hospitalization and carrying a mortality which may be as high as 5 to 10 percent.

Standard blood tests in anaplasmosis are usually abnormal, but not diagnostic. The white blood cell count is often very low, as is the number of platelets in the blood. Particularly astute laboratory technicians may see the organisms in the patient’s blood cells. Liver tests may also be abnormal.

Confirmatory laboratory testing for anaplasmosis is possible, but is done in specialized labs and is not rapidly available; waiting for these results may delay treatment. Thus, most experts begin treatment with doxycycline if the clinical picture is suggestive of anaplasmosis. Patients will generally do very well unless diagnosis is delayed or there is an underlying condition impairing the immune system.

Ehrlichiosis is caused by a bacterium closely related to the one that causes anaplasmosis, Ehrlichia chaffeensis. Although many tick species have been implicated, the lone star tick accounts for the bulk of E. chaffeensis infections. White-tailed deer are the usual animal reservoir. In 2017, there were 170 reported cases of ehrlichiosis in New York.

The symptoms of ehrlichiosis overlap those of anaplasmosis, to the extent that they are nearly indistinguishable. The only exception is that rash, nearly unheard of in anaplasmosis, occurs in about one-third of patients with ehrlichiosis. Similarly, standard laboratory tests show low white blood cells and platelets, along with abnormal liver testing. In contrast to anaplasmosis, it is very unusual to find the organism in blood cells.

Again like anaplasmosis, definitive testing for ehrlichiosis is available, but not timely. Thus, initiating therapy (also with doxycycline) upon suspicion of the disease is vital. Reported fatality rates for ehrlichiosis are as high as 5 percent, mostly in cases of delayed diagnosis or underlying illness.

Tom Welch, MD, is a physician at Upstate Medical University in Syracuse, and a member of the Wilderness Medical Society. He is a licensed professional guide and a Wilderness Education Association instructor, and has guided groups in the Adirondacks, Montana, and Alaska. More information is available on his website and blog, www.adirondoc. com. SUNY infectious disease expert Leonard Weiner, MD, reviewed this column and provided helpful suggestions. This discussion will be continued in the next issue.