One of the ironies of modern medicine is that it sometimes seems that little attention is devoted to the things that bother folks the most. “Shin splints” are a terrific example of this. I put the term in quotes since there isn’t complete agreement among experts on what to call the condition. The currently preferred terminology among orthopedists and sports medicine specialists is “medial tibial stress syndrome” (MTSS). I’ll stick to “shin splints.”

Most of us have a pretty good idea what shin splints are, often from personal- experience. The condition causes pain along the inner border of the tibia, the most prominent bone in the front of the lower leg. It typically develops after strenuous exercise, most often running but also hiking. Hiking which produces a lot of impact (such as walking down a steep trail) can be a particular culprit. It typically comes on during exercise, and remits somewhat after rest. With time, however, it may continue even after active exercise has stopped.

Several muscles involved in walking attach to the inner surface of the tibia, and it is believed that constant pulling of these muscles on the surface of the bone is the cause of the pain. There is really no laboratory or x–ray test which is positive with shin splints. 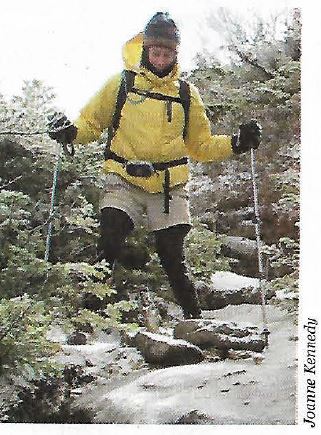 The diagnosis is primarily made by the history. Unlike the sudden pain of something like a sprained ankle, shin splints develop gradually during exercise. The discomfort generally extends from the middle of the bone upward and downward. There is typically no single spot at which tenderness is located; rather, pain extends quite a bit along the entire bone. There is rarely any swelling or bruising over the painful area, but it may be somewhat painful to palpation. Again, however, the pain usually extends over a few inches of the inside of the bone.

Beyond rest, there is really no definitive treatment for shin splints. The old standby medication, NSAIDS such as Advil or Aleve, may provide some relief. Although unquestionably uncomfortable, shin splints rarely are disabling. Most hikers can continue their trip, albeit at a perhaps slower and gentler pace. For most casual hikers, shin splints are little more than an inconvenience. For some competitive runners, however, the condition may result in the loss of an entire season.

For those predisposed to shin splints, prevention may involve modulating the choice of terrain and hike length. Although some advocate the use of a cushioning insole (orthotic), there is no strong evidence basis for this recommendation. It can’t hurt, however.

Finally, a few things can beconfused with shin splints. Lower leg fractures are associated with a definite injury, and typically have exquisite point tenderness. A special type of fracture, “stress fracture” is an exception. These are tiny hairline cracks in the bone which result from continuous “micro trauma.” Stress fractures are more likely to persist after exercise stops, and may be more painful upon palpation. From a practical standpoint in the field, there is no real difference in management from shin splints.

Far more dangerous is compartment syndrome. This refers to swelling of or bleeding into muscles that are contained by firm tissue (“fascia”). Although it typically follows injury, compartment syndrome has occasionally been reported after unaccustomed exertion. Unfortunately, one of the common locations is in the muscle groups of the lower leg, similar to the area involved in shin splints. The pain is far more severe than that of shin splints, and does not remit upon stopping exercise. The affected area is quite tender, and may be swollen. There is typically weakness of the involved muscles, and pain if they are stretched. The pressure within the muscles can result in permanent injury. Urgent evacuation for definitive care is the only field treatment.

Tom Welch, MD, is a physician at Upstate Medical University in Syracuse and an active member of the Wilderness Medical Society. He is a licensed professional guide and a certifying instructor for the Wilderness Education Association, and has guided groups in the Adirondacks, Montana, and Alaska. More information is available at his website and blog, www.adirondoc.com.