I HAVE BEEN ACCUSED, often rightfully, of a lot of things. “Set in his ways” is not one of these. Over the years, I have made 180-degree turns on a lot oflong-held beliefs. Here is a big one. Trekking poles were rarely seen when I began Adirondack hiking. When they first appeared, perhaps in the 1980s or thereabouts, I recall looking disdainfully at them. I even recall jesting (inappropriately, in retrospect) with a summit steward over her lecturing visitors on Leave No Trace while decorating the summit with countless scratches from her carbide-tipped poles. (I still am bothered by that phenomenon, however.)

I first experienced trekking poles while climbing Aconcagua in the Andes many years ago. I have been sold on them ever since. In fact, I now use them on every hike, likely prompting some passersby to sneer at me the way I did at others decades ago!

Setting aside aesthetics and impact (while not trivializing their importance), are there health benefits of trekking poles?

There are some very good data upon which to base an opinion. A recent issue of a professional journal (Wild Environ Med 2020:31:482- 488) features a review of studies on the topic by authors from the School of Health and Human Performance at Northern Michigan University. There are countless other published studies, but this one is a good starting point.

The first observation ( confirmed in many studies) seems paradoxical. In most situations, the use of trekking poles increases cardiovascular work. This is likely because of increased demands on the upper extremities. The paradox is that the user’s perception of work is that it is decreased. Thus, one may get a better cardiovascular workout without realizing it. This is the principle behind exercise equipment such as the NordicTrack® and ellipticals, which incorporate upper extremity activity with lower body exercise. (Trekking poles may have originated in Finland, where “Nordic walking” with poles is a popular aerobic exercise.)

Most people use poles for musculoskeletal benefits. Here, again, there are a lot of studies, although this cannot be assessed as objectively as cardiovascular function. Many studies point to a reduction in lower back pain and in muscle soreness in users of trekking poles. Although these benefits seem reasonable, the data are obviously quite subjective. 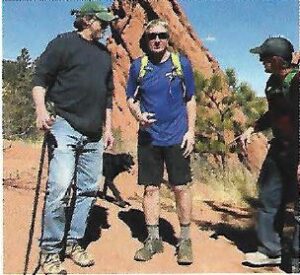 The benefit to joints has been better studied. Many studies point to improvement in pain and function among users with lower extremity joint (mostly knee) difficulties. There are multiple explanations for this. Poles absorb some of the load during hiking, and especially with carrying a pack this reduces stress on knees. Many studies have also shown that one’s stride length is increased using poles. This means that over the course of a day, a hiker using poles is taking fewer steps, decreasing further the stress on leg joints. There is also evidence that balance is improved when using trekking poles, possibly lessening the risk of falls.

Trekking poles might even be considered part of one’s first aid supplies. As I discussed in an earlier column on ankle sprains (September-October 2020), poles can make the difference between an assisted evacuation and a walk-out.

As with any gear, there are techniques for the safe and efficient use of trekking poles, which are outside the scope of this column. Proper use of wrist straps, adjustment of length for terrain, and appropriate use of the locking mechanism are critical in using poles effectively. I was fortunate to learn from a talented instructor (a Sherpa, actually), but there are countless websites and videos that can help.

Tom Welch, M.D., is a physician at Upstate Medical University in Syracuse, New York, and a member of the Wilderness Medical Society. He is a licensed professional guide and Wilderness Education Association instructor, and has guided groups in the Adirondacks, Montana, and Alaska. More information is available on his website and blog, adirondoc.com.